Copenhagen: The centre of craft beer

Discover what makes Copenhagen THE place to go for craft beer enthusiasts, and how the city has developed into the perhaps most interesting beer destination in Europe.

When you visit Copenhagen, you will have a chance to become a beer expert. Just ask the bartender or the guests in the bar about the beer you’re enjoying, and you can have a lecture for free. And if you happen to be in town September 3rd to 11th, there is plenty to learn and taste during the annual Copenhagen Beer Week.

In Copenhagen you will find the most picky beer consumers in Europe. Some people will probably characterize the many eager and knowledgeable beer drinkers as spoiled kids. There is a good reason for that.

For twenty years Copenhagen has been flooded in not just fine Danish beer, but the finest beers from all over the world. 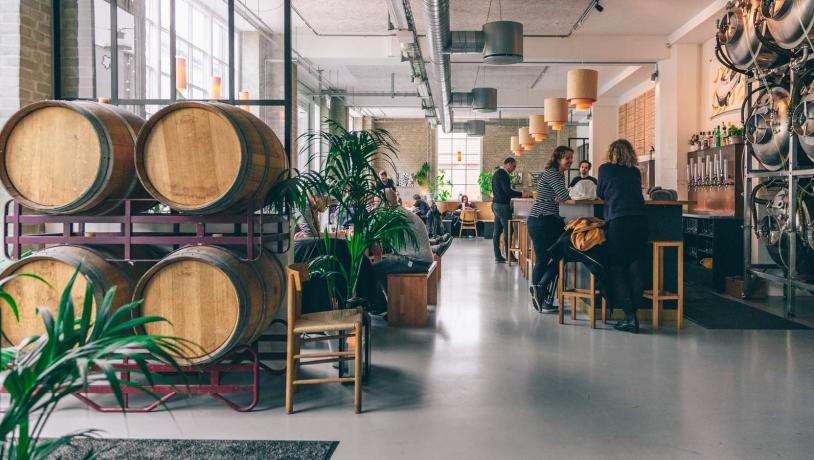 The popular brewery and brewpub, BRUS by local Nørrebro brewery, TO ØL.Photo:-

Copenhagen beer lovers were the first in Europe to embrace the beer revolution coming from the USA, and Copenhagen has gradually developed into the perhaps most interesting beer destination in Europe.

When you go out drinking a beer in e.g. Belgium – world famous for the sweet, fruity and sour beers - it can be difficult to find other beers than Belgian beers. Beer drinkers tend to be patriotic. The same goes for beer drinkers in other renowned beer countries like Germany and The Czech Republic.

In Copenhagen the beer lovers are also patriotic, but they are even more interested in the quality and variety of the beer than the origins of the beer.

If you need a break from the IPA’s, sours, stouts, pilsners, etc., you won’t suffer in a city, where world class quality and variety is dripping through the food and drink culture: From chocolates, coffee, bread, and of course, the many famous restaurants.

There are two giant Copenhagen-based engines, that has formed the beer culture in Denmark and actually also in the rest of the world: Carlsberg and Mikkeller. They are very different – to say the least. 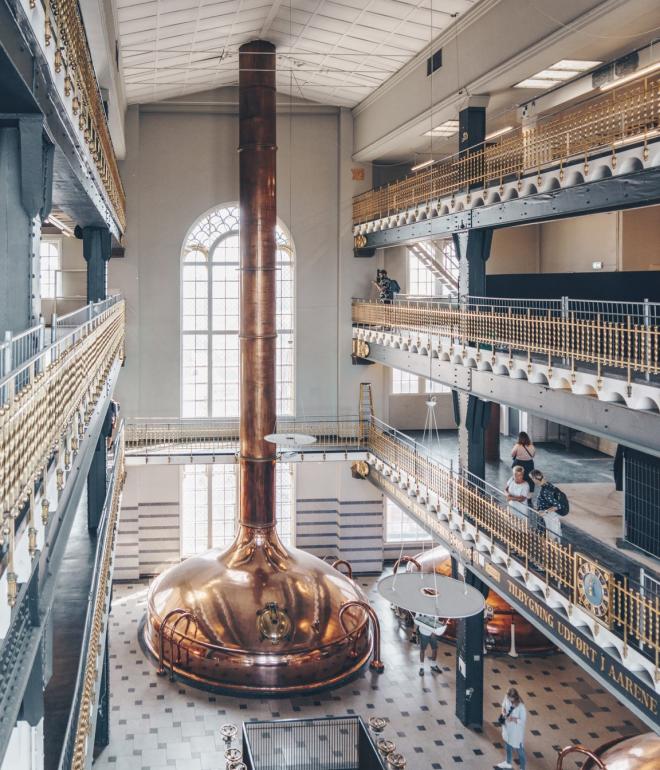 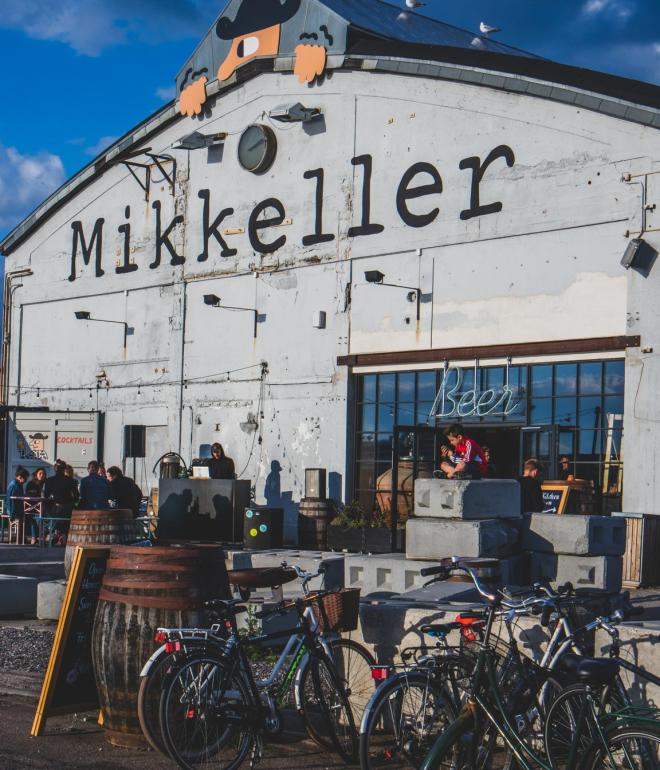 Carlsberg, founded in 1847, is in all respect brewing in the league of Heineken, Budweiser, etc. Mikkeller, founded in 2005, is the core of craft beer revolution.

Somehow Mikkel Borg Bjergsø, the person behind Mikkeller, personifies craft beer – not only in Denmark, but practically in the whole world, where his bars, beers and running clubs (yes, running clubs) are conquering Bangkok, Shanghai, Paris, Berlin, London, Stockholm, etc. Never underestimate a giant. In a funny and paradoxically way Carlsberg has been an instigator for the craft beer movement in Denmark.

The beer revolution was actually a counter-movement to Carlsberg and the other big brewers in the world.

The password to the wifi at the first Mikkeller Bar, the bar at Viktoriagade 8B i Copenhagen, was ”I hate Carlsberg” – that sums up the feeling of the small brewers towards the giants.

But Carlsberg was in fact a first-mover. Already in the year 2000 they launched the sub brand Semper Ardens, and the first beer was the Belgian-style Abbey Ale.

At that time in 2000 in the slumbering time of craft beer revolution a few craft beer bars had popped up i Copenhagen and some intelligent importers of beer emerged, but yet no breweries.

Five years later, Carlsberg made an intelligent and substantial move into the craft beer market with another sub brand, Husbryggeriet Jacobsen, that today is a household name in Denmark.

The craft beer bars are spreading all over the city of Copenhagen, but especially the neighbourhoods of Vesterbro, Nørrebro and the city centre.

In Greater Copenhagen there are around 50 craft beer bars, and it can be a challenge to point out the best ones. But why not give it a shot?! Nørrebro and Vesterbro are in constant rivalry about, which district is the kingdom of beer in Copenhagen, so let’s take a look at what’s brewing in these vibrant neighbourhoods. Click below to see the best ones.

When at Nørrebro the bar Ølbaren is a must. The longest serving craft beer bar in Copenhagen – founded in 2001. Not created by a style-conscious interior designer, but the cosyness is unbeatable, the bartender is a legend and the selection of beers is still picked with a fine steady hand, a charming blend of classic brews and crazy craft.

Nearby you find the lively and big BRUS with 32 taps. Besides being a hot spot for beer lovers BRUS houses a brewery, brasserie and bottle shop. The brewery To Øl is the mastermind behind this house of beer.

On your way to the bar Himmeriget, you will pass the Belgian bar 1420, which specializes in sour beers, and Ølsnedkeren, young guns brewers, who normally brew strong, juicy and complex beers, but haven’t forgotten the art of brewing classic brews too.

Close-by Himmeriget is also Kølsters 12 Haner, the brewpub of the brewery Kølster, which is organic and uses local produce including herbs and fruits.

Himmeriget is where the beer nerds thrive. Not only the beer nerds from Copenhagen and the rest of Denmark regard this place as a temple. When Himmeriget once a year release the most hyped beer Cantillon Blåbær Lambic, beer enthusiasts from e.g. USA camp in front of the bar to get hold of the blueberry sour beer from the Bruxelles brewery Cantillon.

But the crown in the jewel among the beer bars at Nørrebro is Mikkeller & Friends, Mikkellers flagship bar in Copenhagen. Fourty taps with rare and handpicked craft beer from Mikkeller and his friends. Next door neighbor is Koelship bar with Belgian sour beers galore.

If you want to explore the beers from the around 5000 home brewers in Greater Copenhagen, you have a great bar a stone’s throw away from Mikkeler & Friends. Brewers Inc. always has home brews on their 16 taps.

Vesterbro has historically been the partying and red light district of Copenhagen, and the craft beer bars have morphed smoothly into the district. Mikkeller established his first Mikkeller Bar in Viktoriagade, but let’s focus on two venues:

Warpigs is a brewery, bar and Texan barbecue in a former slaughterhouse in The Meatpacking District, Kødbyen. Behind this cool and hugely popular bar is, again, Mikkeller and the American craft-pioneers Three Floyds.

Fermentoren just around the corner. The atmosphere is low key, but the standard of beer is the high. On tap you will always find the brews by Dry & Bitter, the co-owner of the bar, but overall an open minded attitude towards the many beer styles of the world.

Kihoskh is a firstmover among bottle shops in the Danish beer revolution and an institution among beer lovers. Visit the beer cellar with numerous of different beers from all over the world – buy a beer or two and enjoy them in the busy street Sønder Boulevard with a crowd of first class hipsters or bring the beer back to your hotel. Around the corner of Kihoskh (yes the spelling is correct) you can enjoy a fine beer at their craft beer bar, Rbabarrab.

Craft beer in the old town is plentyful too. Skaal and Taphouse are the biggest attractions. The first bar offers 48 taps, Taphouse boasts of 61 taps.

The 48 taps and 75+ beers in bottle/can at Skaal are curated by beer expert Jens Ungstrup, who is Mr. Ratebeer in Danmark. He has rated close to 50,000 beers on the beer rating site Ratebeer.

Taphouse is the biggest craft beer bar in Copenhagen and with their own words: The bar with the most taps in Europe. Taphouse attracts many different kinds of costumers, not only the beer nerds and is located beautifully close to the town hall and the parliament.

Finally Amager Bryghus Taproom Nørreport is worth mentioning. A new taproom just opposite the bustling and busy Nørreport Station. Here you have a perfect chance to calm down with a beer of high quality. Ten of the total 15 taps are dedicated the beers from Amager Bryghus.

The most important thing

In the owerflowing praise of the craft beer bars we must not forget the most import thing about beer in Copenhagen: The breweries. They brew practically all types of beer and not seldom at the higest possible level.

Amager Bryghus must be highlighted.

The brewery situated on the island Amager is a pioneer in the Danish beer revolution and quite a voice internationally. The brewery is still going very strong – just as strong as their beers. Extreme beers are at the core of the assortment, especially hoppy IPA’s, but the ever curious team of brewers is exploring all kinds of beer styles at an unbelievable pace.

BrygBrygBryg is a newcomer, but has a potential to become a new icon. Very productive and inventive. The small scale brewery is known for it’s sour beers and beers with fruit.

Dry & Bitter also excels in… juicy and sweet beers. This brand is both for the hard core beer nerd and the curious beer drinker. The assortment of beers are primarily about IPA, but Dry & Bitter is continuously expanding its range of beers. The latest addition: Pilsner.

Slowburn is perhaps the youngest and trendiest brewing team in Greater Copenhagen – established by an Italian, an American and a Dane. If you crave for the latest trends, look no further than Slowburn. These days Slowburn is mad about pilsner.

Gamma is the Danish undisputed masters of the most hyped beer style these days: NEIPA, New England India Pale Ale. Juicy and hop-infused beers galore is alpha and omega at Gamma.

The next brewery is also flying high in the Danish beer revolution. IPA is at the center of the Flying Couch, but the brewery is also talented in making sours and stouts. You can always find the beers from Flying Couch at the beer bars Ørsted Ølbar and Søernes Ølbar – the owner of the bars is a co-founder of Flying Couch.