Is fællesspisning the new hygge?

Copenhagen-based food writer, founder of Mad About Copenhagen and one of our local contributors covering Copenhagen's culture, gastronomy and urban development. 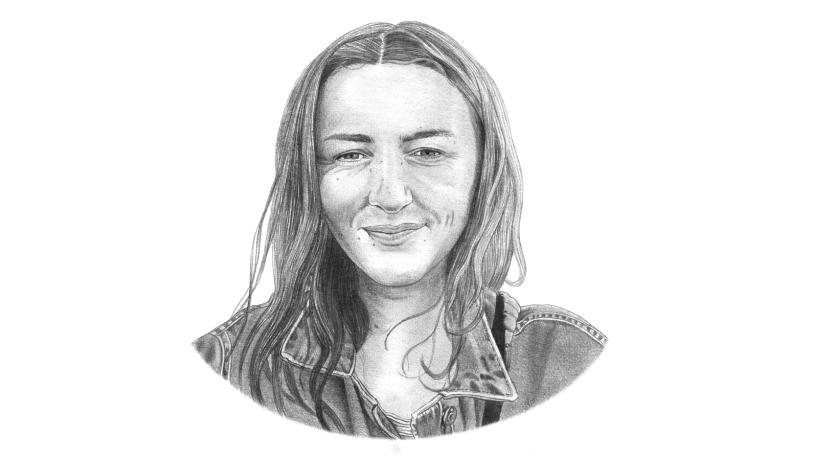 Don’t panic, hygge isn't going anywhere. But I’d like to pitch “fællesspisning” as the next Danish word to garner international attention. Directly translated, it means "communal eating", but of course it is so much more than that.

The Danish language contains many words for concepts that involve togetherness, sharing, and community. It contains more words around these topics than the English language does—which is a remarkable feat considering the English dictionary has 470,000 words compared to the Danish dictionary’s 200,000. I certainly see this togetherness reflected in the people; Denmark is a country that values teamwork and community to its very core.

Take the food scene, for example. Copenhagen has an incredible food scene, considering how small the city itself is, and one of the things that really makes it special is how people share and collaborate with each other. Restaurants here don’t compete to be the best and destroy the rest; instead, they often collaborate on projects together and help each other out with things.

And then there is fællesspisning. Fællesspisning has had a bit of a comeback in the past five years or so. It is not a new or particularly original concept. Probably the most common example of it in Denmark is the community centers (also a much better word in Danish: “forsamlingshus”) in smaller towns and villages, where locals gather to eat, drink and play bingo. Today, though, there aren’t many of them left in the big cities, leaving a gaping hole to be filled and growing demand for places like this. 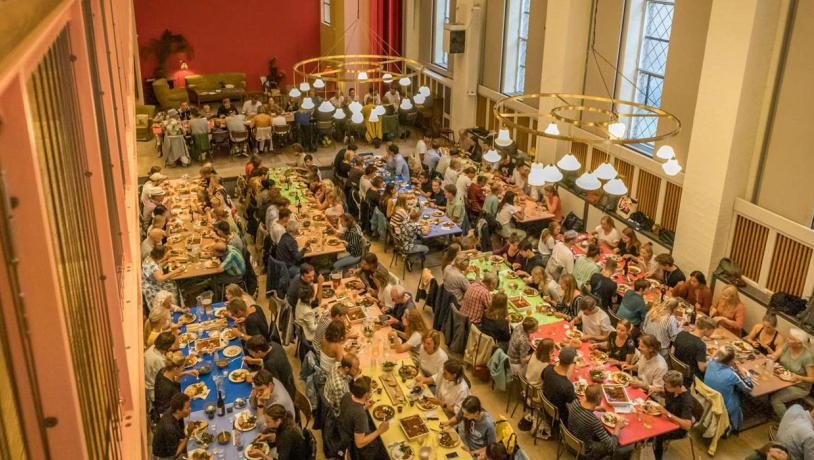 In a reformed church in Vesterbro, you’ll find one of Copenhagen’s most well-known fællesspisning spots, Absalon.Photo:Giuseppe Liverino

The easiest way to describe fællesspisning is to compare it to a family meal.

Remember being a kid and coming home for dinner in the evening? Everyone would eat at the same time, you’d eat the same thing, and you’d probably have to help by bringing it to the table or doing the dishes afterward. Imagine that, just on a greater scale, with your friends and/or people you’ve never met before.

Lennart and Sus Lajboschitz, the founders of Absalon—one of Copenhagen’s most well-known fællesspisning spots—put this demand down to the fact that we live in more isolated circumstances than ever before. The internet and constant connection have meant we’ve lost the places in our neighbourhood where we connect with our community and our neighbours, especially in big cities. People are living alone, not talking to each other in the supermarket queue, and not looking each other in the eye while walking down the street. Fællesspisning seems the perfect antidote to that. 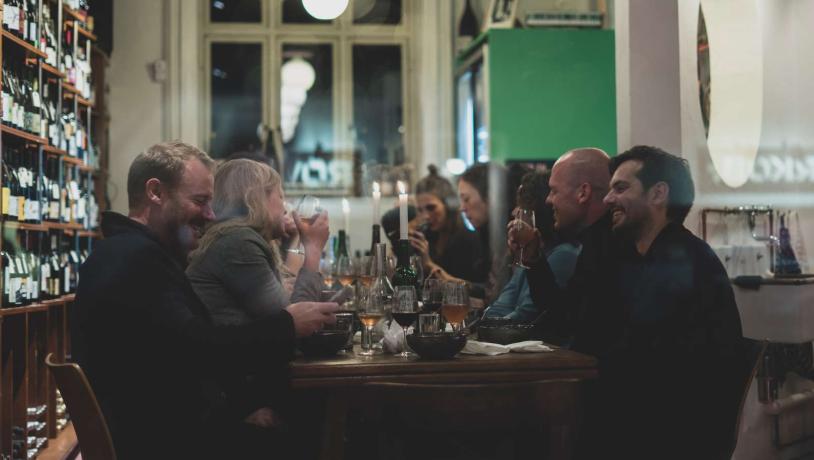 For fællesspisning to work, it relies on the participation and openness of everyone attending, because a large part of it is the conversations and dynamics that are created around the table. At most of the dinners I've attended, we’ve collected our plates, food, and cutlery shared everything around the table “family style” and cleaned up afterward. Some even involve cooking too. Sharing these tasks provides an easy way to strike up conversations with others.

All are welcome—students, the elderly, toddlers playing board games, the builders working around the corner, the group of dressed-up women who've brought along their own bottle of champagne. Non-Danish speakers, too!

It’s cheap too, usually costing something between 20 and 100 DKK for a meal, depending on where you go. This is possible because there is no need for waiters, the food is made en masse, served at the same time, and shared by the participants. But, interestingly, the price isn’t the reason why most people attend. It’s the chance to engage with others that seems to be the main attraction.

Here are some of the places in Copenhagen that hold fællesspisning regularly.

At Absalon, food is just one of the many ways in which people are encouraged to interact. Aside from fællesspisning, you can get intimate with your fellow human beings over ping-pong, bingo, running, singing, board games, life drawing, morning dance, acro yoga, backgammon, or just by lounging on one of the funky sofas, sending out ‘talk to me’ vibes.

Fællesspisning happens every evening at 6 pm. An hour before, a small crowd loiters outside the church, beginning to arrange itself into a queue. When dinner is frequently is sold out, it’s prudent to be early! When you get inside, you’re led to a seat by the host. There’s not a seating plan as such, but the host’s job is to place people optimally for conversation. If you arrive on your own, for example, you might get seated next to people he knows to be friendly, or with others who also come alone.

Vegetarian nights are on Monday and Wednesday and then there’s Friday Night Delight which includes a two-course meal and live music. When the weather's good, the tables are moved outside to the grassy strip through the center of Sønder Boulevard. Tickets to Absalon’s fællesspisning can be purchased ahead online or bought at the door if there’s space.

Kafa X is a community kitchen that holds fællesspisning every Tuesday at 7 pm. The food is vegan (sometimes vegetarian) and most of the ingredients are things that would usually go to waste—donated by local grocery stores and bakeries in the area at the end of the day and collected by volunteers.

It’s the cheapest in the city at just 20 DKK per person, and if you come early to help with the cooking or cleaning, you can eat for free. Diners serve themselves buffet-style and after the meal, everyone is expected to wash their dishes. BYOB is encouraged.

Send Flere Kydderier is primarily located in Nørrebrohallen and their café is open daily for breakfast, lunch, and dinner. On Tuesday and Thursday evenings, they hold fællesspisning between 5 pm and 8 pm. The food is always different, as the organization is run by women from all sorts of cultural and culinary backgrounds. One day you might be eating Morrocan, the next Lebanese, the next Korean, and so on.

The name, "Send More Spices" is inspired by the women who migrated to Denmark in the 80s and 90s who would always ask their families to send more spices to Denmark. And it's in this spirit that the organization was founded in 2013, for and by ethnic minority women—who are often overlooked in the Danish labor market. They created a place where women can work and share their native cuisine with Copenhageners. 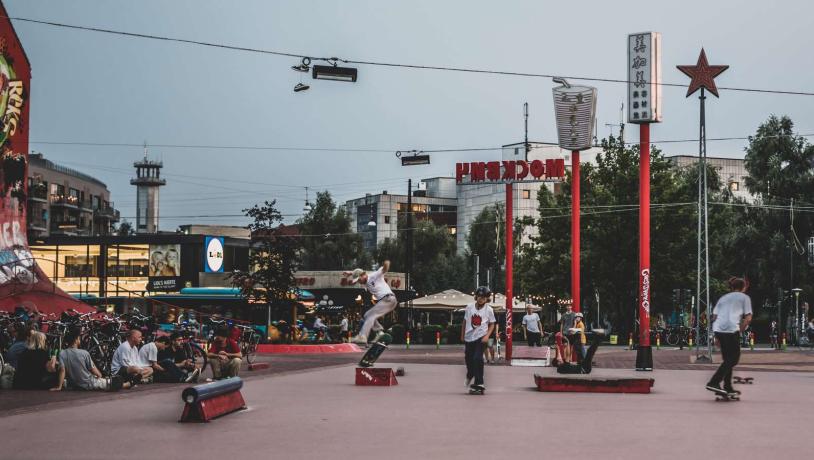 Gonzo is a cozy little café on a cozy little street and it hosts fællesspisning on Monday evenings, with different themes each time (check their Facebook events for information about the next one). All the tables in the café are joined together, so you’ll no doubt find yourself in conversation with some fellow fællesspisers. You can show up between 5:30 pm and 8 pm, but it’s wise to come early as the space is small and popular!

The café itself doesn’t serve a particular genre of cuisine other than comfort food, often vegetarian. Their focus is more on creating a space for people—young and old, local and foreign—to come together. 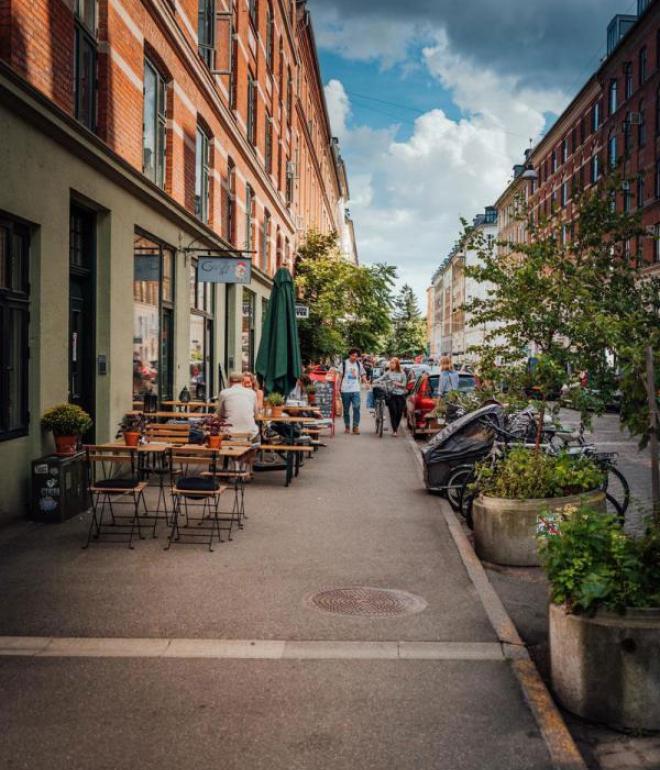 Jægersborggade
Photo: -
Jægersborggade is one of the loveliest streets in Copenhagen. Here you’ll find independent eateries, crafts and shops of all kinds.

Wednesday is KU.BE’s fællesspisning day, and it happens at 5:30 pm. The café tables are moved into long rows and there’s always a vegetarian option and a good atmosphere. The exercise facilities also stay open longer on Wednesday night, so you can go climbing before or after your meal.

Ishtar is also known as “The Ethnic Red Stockings” (The Red Stocking Movement was a Danish women's rights movement that was big in the 70s and 80s) and it is similar to Send Flere Kryderrier (see above). It is a non-profit project for Middle Eastern women who want to bring the cuisine they learned from their parents and grandparents to Denmark.

They have a catering business, a shop and they hold cookery workshops too. On Wednesday evenings at 5 pm, they open their kitchen up to the public and host fællesspisning. The menu is usually a mix of Middle Eastern dishes, served family-style. There’s always a vegan option.

KraftWerket is a cultural center located in Valby. It’s a project space and a sort of “embassy” for young cultural entrepreneurs, acting as a middleman between the council and the local young people. There are exhibitions, concerts, political movements, and plenty more springing up here. The space is run democratically, so it’s those who use the space who decide what happens in it—one of those things being fællesspisning.

At 25 DKK per plate, their fællesspisning is also one of the cheapest in the city. Everything is 100% vegan and they also have a bar in the cellar (“Undererket”) where you can buy soft drinks and alcohol. The bar is open 24/7! It happens every Tuesday at 6 pm If you’re planning to attend, it’s recommended to sign up on Facebook for the event, so the kitchen knows how much food to make. Also, remember to bring cash! The last time I checked, they don’t accept credit cards or MobilePay.

Another cheap one! Ungdomshuset’s fællesspisning costs only 25 kr. per person and it happens every Thursday at 7 pm. Also, cash only. The food is vegan, and generously portioned (you won’t go hungry!) They always welcome volunteers to help in the kitchen, so if you have a bit of extra time on your hands, you can also turn up at 3:30 pm.

Undomshuset is similar to Kapelvej 44 in that the projects that happen in the house are run by “activists” who use the house, and anyone is welcome to pitch a project at one of their Monday meetings. You can find more information about the house in English on their website. 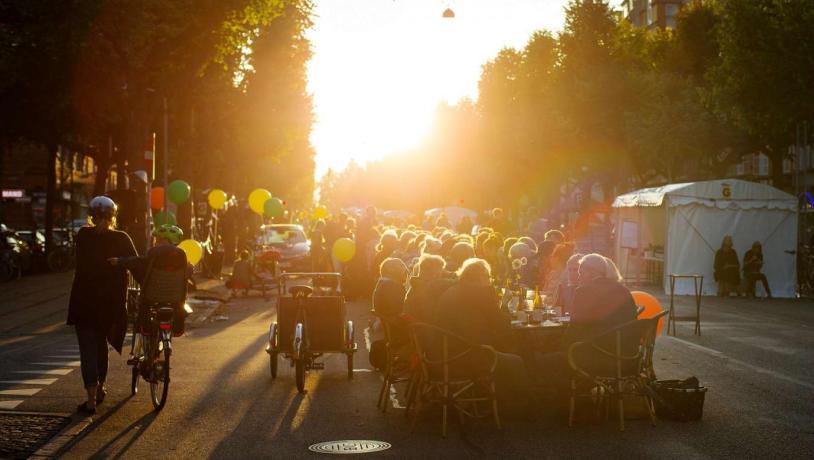 If you live in Copenhagen, I’d also recommend becoming a member of Københavns Fødevarefællesskab—a voluntary initiative to deliver the best organic produce from local farmers directly to the consumers, with no packaging or middle-man fees. Most districts (the organisation has localised spots in the different districts in Copenhagen) hold fællesspisning for the members once a month, costing only 25 kr. per head.

Get to know Copenhagen from the local experts