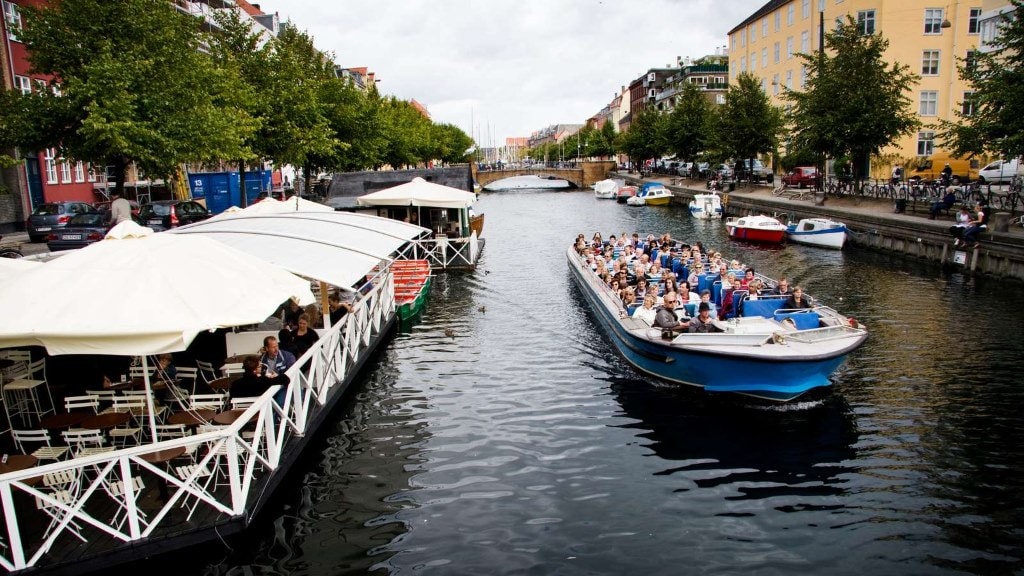 Make yourself comfortable in one of the blue Netto-Boats and see Copenhagen from the waterfront. Enjoy the scenery that passes by while your guide tells about the sights in Danish, English, and German.

The tour starts from Holmens Church. You will pass the old Stock Exchange and sail through a canal called "Børsgraven". You can also hop on a boat in Nyhavn, the picturesque canal with many old houses and sail ships. Nyhavn is one of the oldest parts of the Copenhagen harbor and dates back to 1673.

From there the boat approach the area of Holmen which was the naval base of Copenhagen for more than 300 years. Holmen is situated on four islands. On Frederiksholm we have The Danish Film School, The Drama School, The Academy Of Rhythmic Music, and The Royal Danish Academy of Fine Arts Architect School. To the left you can see "Dokøen" (the Dock Island) and "Frederiksholm" and to the right the Arsenal Island.

You will sail past some of the 250 years old bastions or powder magazines, one of which – Frederiks Bastion – has been restored and converted into a small art gallery.

Leaving the area of Holmen you can see Nyholm, the fourth island of Holmen, where there is still a naval college. To the right, you will see the old Mast Crane from 1748, which was previously a well-known landmark at the entrance to the Copenhagen harbor. Finally, you can see the Battery Sixtus built-in 1736 – 1744.

You will also see The little Mermaid the royal residence of Amalienborg Palace and enter the picturesque Christianshavn’s Canal with the Church of our Savior with the famous, twisted spire.

Buy your tickets at the Visitors' counter or on the boat.