The green revolution is served with vodka shots

As I arrive at Baka d’ Busk on a hot August morning. Philip Nussbaum Varlev is already busy getting ready for the day. Tables and chairs need to be arranged and set up outside the restaurant. He is shirtless. Hard work makes you sweat. The shirt quickly comes back on when I pop into the restaurant, though. With grand gestures, I am welcomed and offered sparkling water.

I can immediately sense how Philip is accustomed to handling guests. The roles are obvious, he is the host, and I take on the part as the curious guest. Right off the bat, we dive into talks about their wrought iron railings on the stairs to the basement and their stock of fresh produce in the cellar; here you go, do you want to taste a tomato? This is the best table in the house; Marmorito. Everything happens at once, and maybe this paints a pretty good picture of what kind of place Baka d’Busk is; controlled madness, a carefully choreographed anarchy, which creates a mosaic of very apparent sensory impressions. 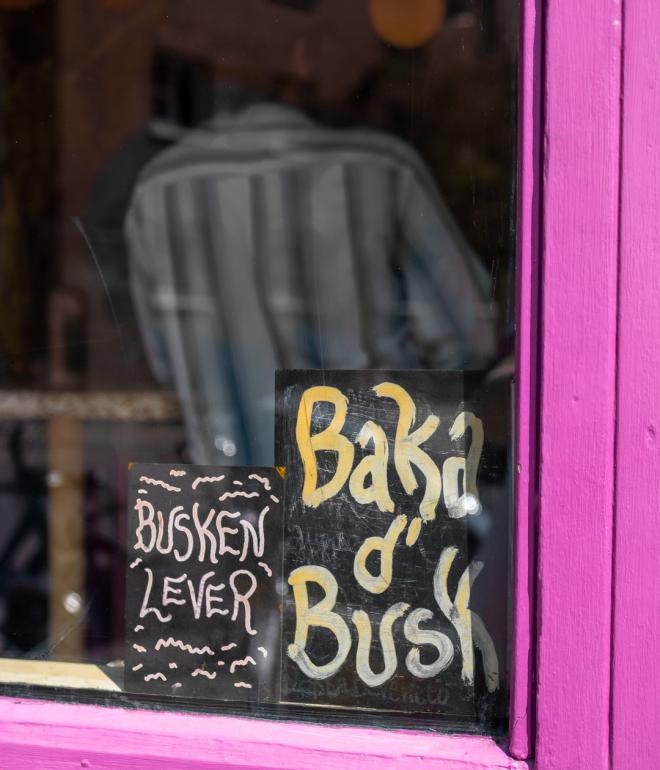 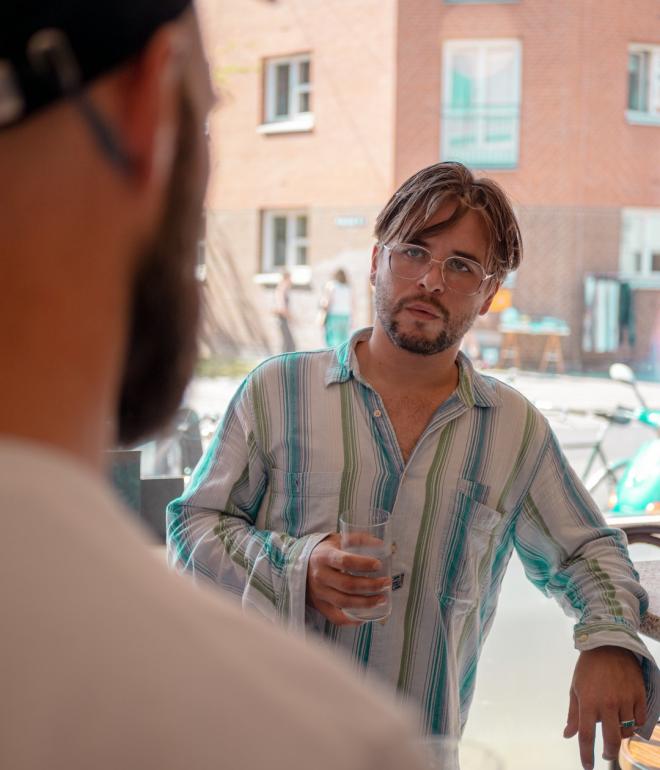 The urge to go against the norm

Baka d’ Busk opened in 2018 and is run by six childhood friends, who call themselves “The Plant Boys”, which is, of course, spawned from having a vegetarian bistro as their joint project. Of the six entrepreneurs, two are trained chefs, one is a sommelier, but not all of The Plant Boys come from the restaurant industry. In the crew, you will also find a blacksmith, one with a background in arts and one in media production. This particular constellation creates a unique dynamic, which can be felt in everything that unfolds in the circus that is Baka d’ Busk. There is a wealth of ideas, thoughts and an urge not to follow the norm.

The name Baka d’ Busk is a part of the storytelling as well. What does it even mean? It is a long story, but you’ll get the short version: When the six founders had to come up with a name, they got into a discussion on which plant would have the most cultural significance in modern history. Eventually, they all agreed on the burning bush in the Exodus. Then one part of the name was settled on, busk meaning bush in danish. Baka is Japanese and means “fool”; as they’re all fools for vegetables, this worked nicely, and the restaurant got its name. 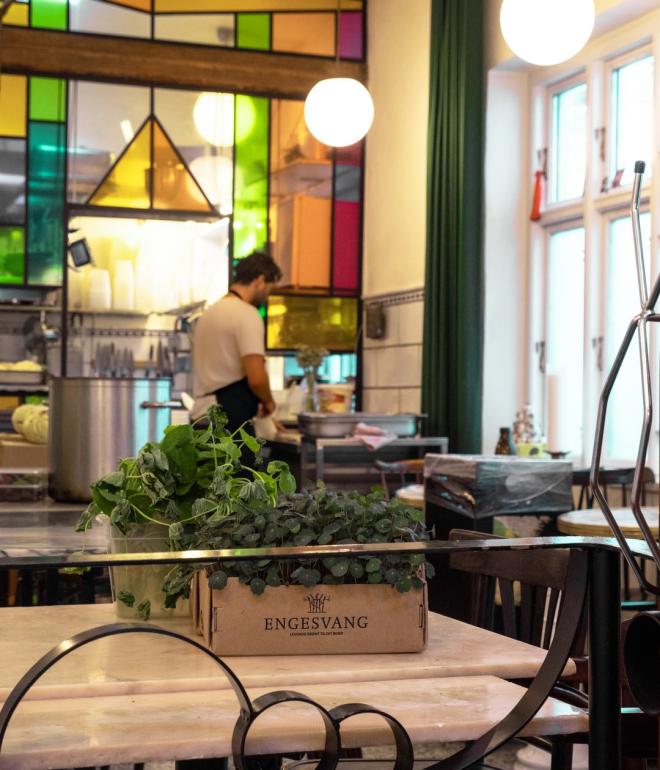 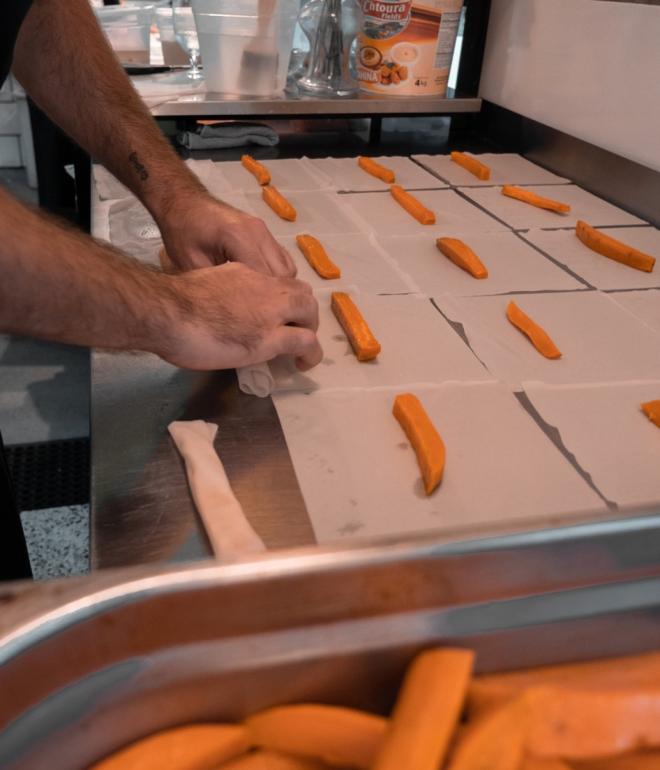 We move through the restaurant with a couple of cherries in one hand and a coffee in the other. There is a lot for the eye to register. Everything in the room is built for the establishment or carefully curated. In the back of the restaurant, a beautifully crafted glass mosaic divides the kitchen and the dining room . The terrazzo counter for the bar is specifically cast for the bar. The tables are hand-picked and lovingly given distinct names. You won’t find anything as dull as table 1, table 2, table 3… Best table in the house is Marmorito.

The featured art on the walls is all by young artists from the Copenhagen art scene. The star of the show, though, is, of course, the food; plant-based food. 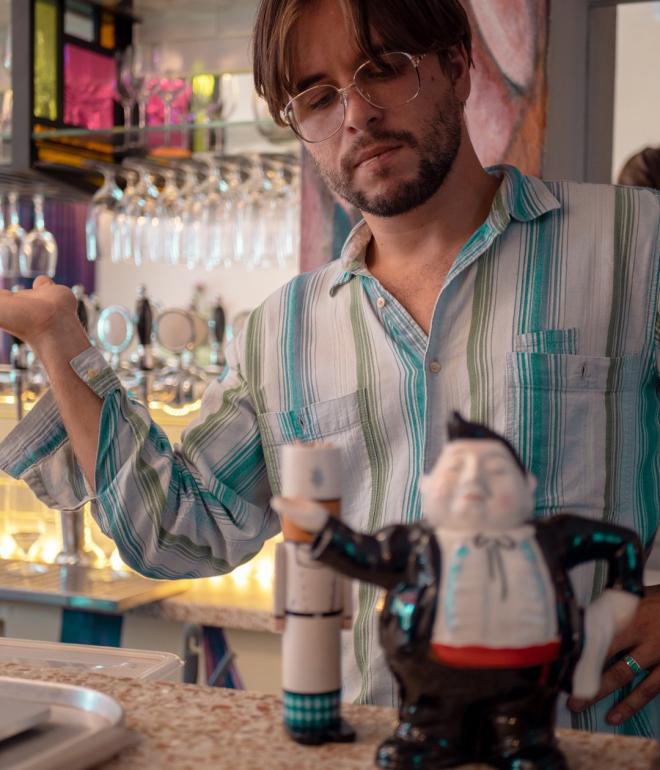 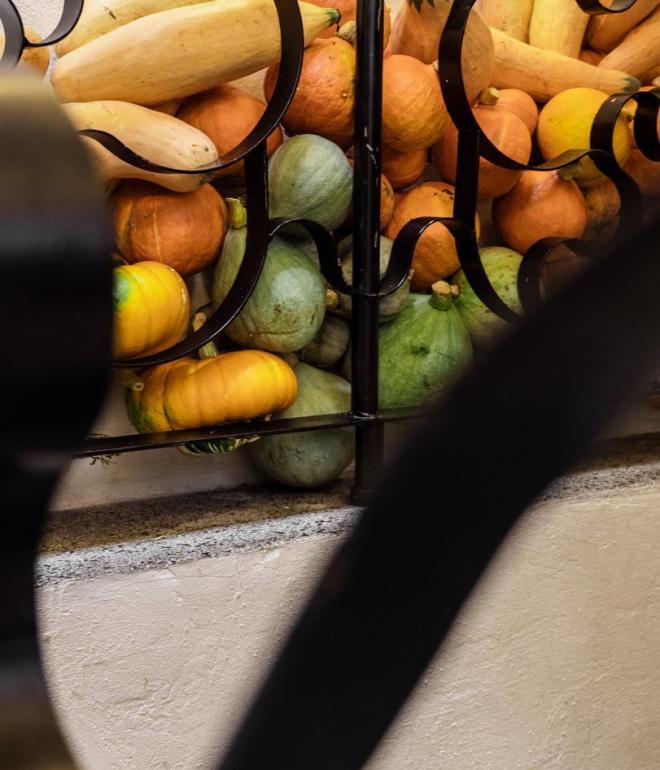 Baka d’Busk is, as mentioned, a vegetarian bistro that serves seasonal crops from local, organic suppliers around Zealand. “Vegetarian food has way more potential than meat”, Philip says. “You have a plethora of options when it comes to the actual cooking and creating flavours. You can cook a bell pepper in hundreds of ways, which is impossible with a steak. Of course, the garnish can vary, but then we are back at talking plants.

It is quite a coincidence how the six friends jointly became restaurateurs; the same is to be said about the plant-based menu, as neither one is vegetarian. However, the chef Jonathan Zeuthen Knoll trained under the highly vegetable-savvy Erwin Lauderbach at Lumskebugten, which is why he knows vegetable cooking as the back of his hand. It is the pure love for plants, though, which is the driving force. Their straight-up adoration of everything eatable growing from the ground is nothing short of throbbing passion.

The menu is like everything else in Baka d’Busk, in constant transformation. Firstly, it suits the dynamic of the place, but also because it is rooted in the availability of seasonal ingredients. But it could also be based on creative decisions or even as a response against stagnation.

It is more or less a mainstay that vodka shots are served alongside the appetizer and before the main course. It’s a palette cleanser and most definitely adds to the atmosphere. It’s not unusual to see the hosts toasting with their guests. Again to create a powerful energy and dynamic between the host and guest. 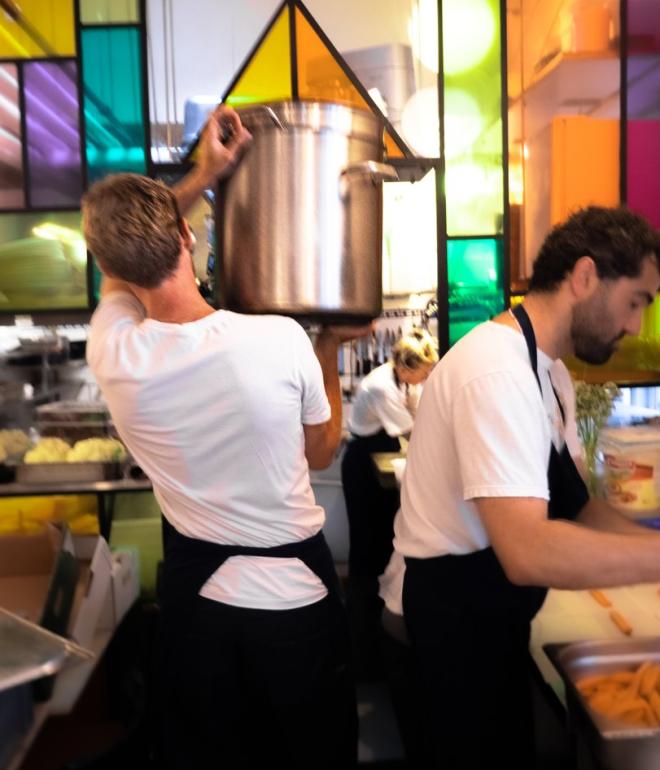 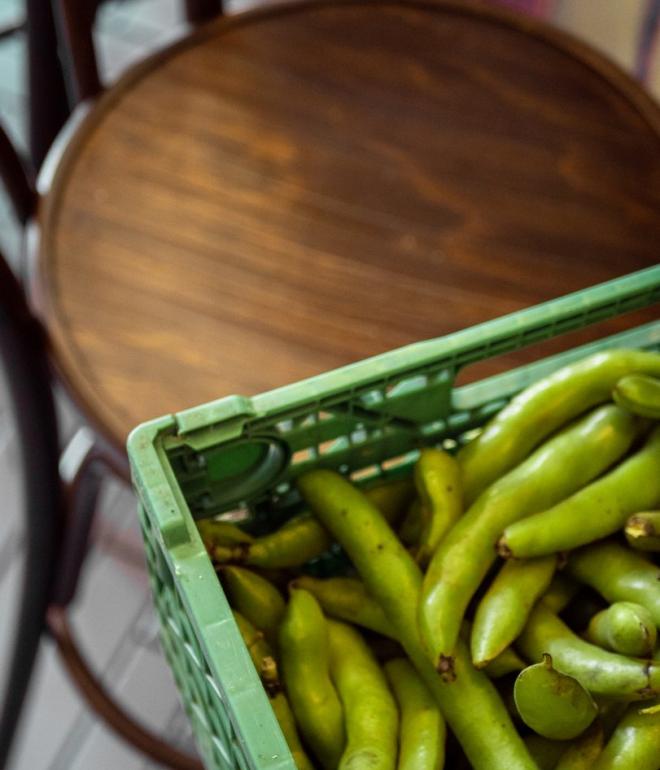 Even though you won’t find any meat on the strictly eclectic dinnerplates curated by the restaurant, you will find no waving fingers, judgement or preaching. However, you are met with indirect suggestions from the food served to ask yourself if you really need steak or chicken on your plate every day?

”I like the idea of turning a weekly meat-free day into having meat once a week”, Philip states, referring to both the climate situation and just as much concerning eating well and having super enjoyable meals. He continues, “But none of us is vegetarians or vegans. We won’t judge anyone or even have an opinion on what people should eat when they step out of our restaurant. We’re sinners just as you”, says Philip with a smile on his face.

The pleasures of a greener life

The philosophy at Baka d’ Busk is that having a meat-free meal isn’t a loss but rather an option for something more exciting and versatile. Nowadays, vegetables aren’t the overcooked string beans, sadly lying on the edge of the plate as an excuse for themselves. Today, they are the star of the cabaret. They are a spirited show that arouses the curiosity of those of us who aren’t outspoken vegetarians or vegans.

Restaurants that take sustainability to another level