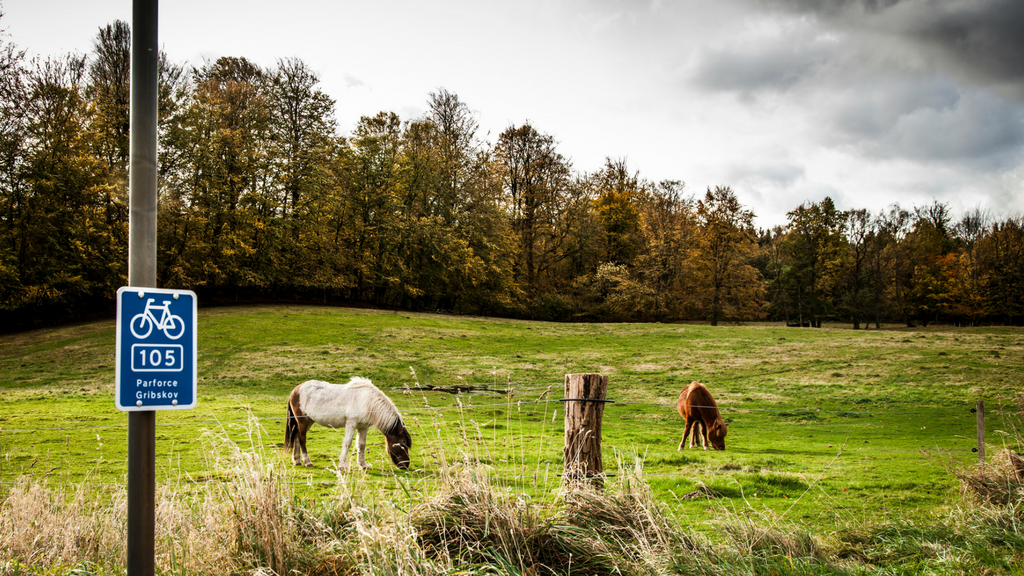 Photo: Sune Magyar
Activities
Tour suggestions
The Par Force Bicycle Route 105 guides you through Gribskov forest and introduces you to some of the areas and special places that help make the forests and roads UNESCO world heritage.
Address

The Par Force Bicycle Route 105
Add to my trip

So jump on your bike, get out into the forest and enjoy some of North Sealand's world heritage.

You can find a PDF (DANISH) with the bicycle route and map here, or go to the tourist information office in Hillerød or one of the other tourist inspiration places in Hillerød to find the map.

The castle is one of northern Europ's most beautiful Renaissance castles. In 1560 Frederik II started the construction of three islets, but the current appearance can be attributed to Christian IV, who was born at the castle in 1577. The castle burned in 1859 during Frederik VII's reign, and you can see a statue of him at the square in Hillerød. The castle was reconstructed with funds from private citizens, including the brewer J.C. Jacobsen, the founder of Carlsberg. He took the initiative and founded the Museum of National History at the castle, which opened in 1878 and showcased 500 years of Danish history. In the castle church, you can see the nobles' coats of arms, which are still updated, as well as the Compenius pipe organ from 1610. In the castle courtyard, you find the great Neptune Fountain, initially constructed by Adrian de Cries in 1616-21. The current fountain is a copy as the original was taken as spoils of war by the Swedes in 1658.

The King and his entourage used the miniature castle as a sauna after the royal hunts in the forests. On the 2nd floor, you find exciting stucco decorations which have the same motifs as the castle initially had before the fire: land animals on one side and fabled animals on the other. The pavilion was built in 1580 by the same workers who built Kronborg castle. The pavilion is only open once a year on the Culture night in September. Just after the castle, on your left, you will pass by a model of a Norwegian manor on Louise's island.

Where Odderdamsvej reaches Kildeportvej, you can see the cross in the road system called The Eight-way-cross 'Ottevejskorset'. From here you can clearly see the eight radiating roads which exemplify the hunting systems geometry. The Eight-way-cross is a gateway to the world heritage in Gribskov, with information plaques and pamphlets. Odderdamsvej continues asphalted through the forest because it is the old municipal road to Hillerød

4. The star with Kirkegaard's stone

The top of the route is also called The Seven-way-star or The Red-post-star. Stand in the middle of the star and imagine the king waiting for the chase and the deer's exhaustion. Or sit calmly on the bench in front of the stone commemorating Søren Kirkegaard, famed author, poet-philosopher, social critic and theologian, who set out into Gribskov to find peace to consider life and its many choices. Right here there are many roads to experience, just as in life. Kirkegaard mentions in the book "Stages on life's way" how he uses a special place in Gribskov for meditation and reflection. The stone was placed in 1913 on Kirkegaards 100th birthday. In reality, he did not sit here but at The Eight-way-cross.

A beautiful little lake and a stepping stone for the local train 'Gribskovsbanen'. To board and disembark the train it is necessary to press the stop button.

Here ammunition, explosives and other resources were air-dropped for the Danish resistance during World War 2.

A wandering stone from the ice age. The stone was transported here by the ice flow from its home in Norway or Sweden.

The multi-story log cabin is one of the largest in Northern Europe. It is used by the scouts, and if the doors are unlocked you are welcome to have a look inside.

Where the path along Nødebovej hits Skelvej you can bike up to the ponds in Stenholt's enclosure. Here you will find tables and benches. The ponds were used for breeding carp and other fish which the court considered as fish fit for the nobles. In addition to this, the ponds were part of a water supply system for Stenholts' watermill by Lake Esrum. The area south of Nødebo is an important bird sanctuary as well as the home for protected species of orchids. At the lake, you will find a birdwatching tower where you can experience the area from above.

For the whole family