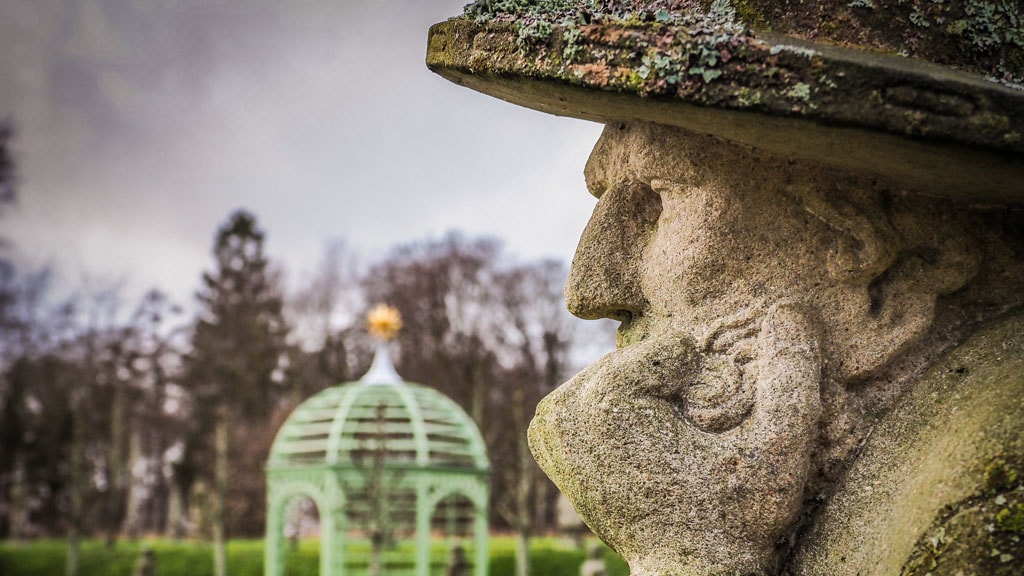 Photo: Ann Jørgensen
Attractions
Parks and gardens
Sculptures in royal gardens often depict gods and goddesses of antiquity. But in Fredensborg Castle Garden you can see a unique attraction: 70 sandstone sculptures of regular fishermen and farmers, as they looked in 18th century Norway and the Faroe Islands. The sculpture group is called Nordmandsdalen, initiated by Frederik V in 1764.
Address

Peasants and fishermen in the royal garden

The Nordmandsdalen in Fredensborg Castle Gardens is a rare fusion of sculpture and garden art. The plant itself is shaped like an amphitheatre with three terraces, centred around a pillar with a gilded ball on top. On the terraces stand a total of 70 sculptures depicting 60 Norwegian and 10 Faroese fishermen, peasants, wives and other ordinary people, as they looked in the 18th century. It was quite unusual for that time to depict ordinary people, especially in a royal garden.

The story behind Nordmandsdalen starts with the Norwegian postman Jørgen Christensen Garnaas. He observes the people he meets on his daily mail route, and in his spare time, he carves little wooden figures of them. Suddenly he gets a distinguished order: King Frederik 5. has seen the small works of art, and he orders a series of figures in ivory and walrus. They are meant to be models for full-size sculptures of ordinary fishermen and farmers in the Nordic countries, to be displayed in Fredensborg Castle Gardens.

One by one, the 70 sandstone sculptures are carved between 1764 - 84. In 1784 they are finally erected in Fredensborg Castle Gardens, in what we today know as the Nordmandsdalen.

Today, the sculptures give us an insight into what the world outside royal life looked like in the 18th century, how ordinary people in the Nordic countries were dressed, and what tools they used for fishing and agriculture.

Renovated and re-opened in 2002

Sandstone sculptures do not last forever, they are broken down by the ravages of time. In 1984 the Agency for Culture and Palaces decided to re-create all the figures. In 2000, the entire plant was restored to its original form. Therefore, on 9 September 2002, Queen Margrethe was able to re-open the Nordmandsdalen after a major renovation.

The Nordmandsdalen is located in the public part of Fredensborg Castle Garden, which is open year-round.