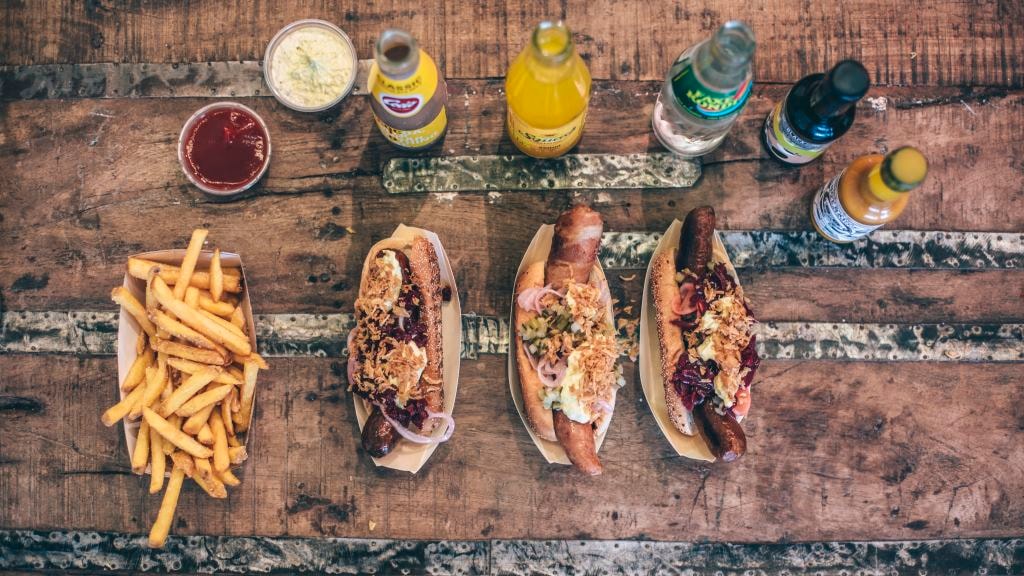 It is almost impossible to walk around the Copenhagen city center without passing by at least a couple of hot dog stands. It is a traditional Danish fast food, well almost a cultural institution you could say. But a hot dog doesn't have to consist of bread with a sausage and a blob of ketchup on top. Not if you ask John Michael Jensen, or Sausage John as he is also called, the owner of the hot dog stand John's Hotdog Deli.

The concept at John's is different. Durum bread made with butter, good quality juicy sausages and homemade dips. Not only the regular ketchup and mustard as traditional, John also makes chunky remoulades, pickled vegetables, chutneys, Mikkeller beer mustards and many more. And if you are longing for a more classic version, you can order that as well.

Build your own hot dog in the Copenhagen Meatpacking District

For many years John's hot dog stand was to be found on either Axeltorv or by the Copenhagen Central Station, and in 2015 he won a prize for the best Takeaway of the year in Copenhagen. You can still find him and his hot dog stand there, but from spring 2017 he also opened a more stationary spot at the Meatpacking District in the vibrant and hip Vesterbro.

Here you pay 50, - and top your hot dog with up to 10 different, homemade garnitures. With other words you get to build your hot dog as you'd like and eat it to-go, in the deli or outside when the weather is good. If you are not up for a hot dog, you can also order a few other things from the menu like a classic 'frikadelle' (meatball) sandwich. Afterwards your fingers will most likely be greasy, but you won't regret a thing. It is every bite worth it.