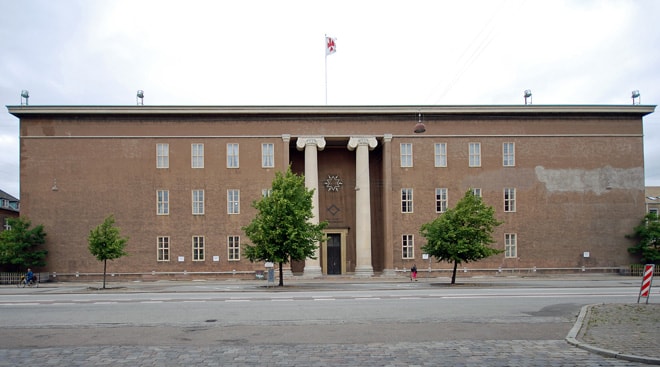 The Danish Order of Freemasons

The Danish Order of Freemasons (The Grand Lodge of Denmark) is located on Blegdamsvej in the Østerbro area of Copenhagen. It was designed by Danish Freemason and architect Holger Rasmussen.

The building is over 13,000 square metres, has about 335 rooms and dates back to 1927. It has three floors above ground and two floors below. The two large pillars in front of the lodge's main entrance are 16 metres tall and weighs 72 tonnes.

The Grand Lodge has double hollow walls. The building is completely symmetrical, and the door at the main entrance is covered with bronze.

During World War II, 21 September 1943, The Grand Lodge of Denmark was occupied by German police accompanied by Dane Poul Sommer. The Danish Freemasons had exactly four days to leave the building, and from 25 September 1943 it functioned as The Schalburg Corps' headquarters.

The Schalburg Corps consisted of Danes in German police service during the war and was a branch of the Germanic-SS. Their job was to keep order and collect information that would lead to the arrest of Danish resistance fighters.

After the Second World War a plaque with the names of a group of resistance fighters from the Danish resistance movement was put up to the left of the building's main entrance.